Active travel campaigner Sarah Berry weighs up the evidence around low traffic neighbourhoods and local crime figures, with a focus on women's safety and sense of security.

In an address to Parliament earlier this week, the Member of Parliament for Ealing Central and Acton, Rupa Huq, asked a question of her colleagues.

Ms Huq raised the issue of women’s safety on the UK’s streets, which in the light of the recent kidnap and murder of South London woman Sarah Everard, is understandably at the forefront of many minds.

But in a confusing move to many, Ms Huq didn’t reference women’s safety generally, but instead she specifically asked about the connection between safety and low traffic neighbourhoods - as well as housing developments - urging her peers to ensure that any reappraisal of LTNs across the country ensure 'consideration of women’s safety and fear of crime is mandated,' implying that the schemes somehow leave women at greater risk because of the lack of passing traffic.

Ms Huq then doubled down on this position, publishing a comment piece in the Sunday Telegraph questioning whether low traffic neighbourhoods put women at greater risk.

So what impacts do LTNs have on the safety of the women and men who live in and travel through them? This was the exact question researchers Rachel Aldred and Anna Goodman set out to answer earlier this year.

Installed in 2015, Waltham Forest’s low traffic neighbourhoods have had longer to settle in and take effect than their emergency counterparts installed across the country in response to COVID-19 last year.

By examining police data from the area from between 2012-2019, Aldred and Goodman hoped to see whether or not the introduction of filtered streets had any bearing on the safety of those who travel on them. Spoiler alert: it does. Aldred and Goodman’s study showed that the low traffic neighbourhoods in Waltham Forest saw a 10% reduction in overall crime when compared with other areas of the borough that hadn’t been filtered, with significant decreases in violence and sexual offences specifically noted.

This was enough for Aldred and Goodman to conclude that low traffic neighbourhoods likely make our streets safer. 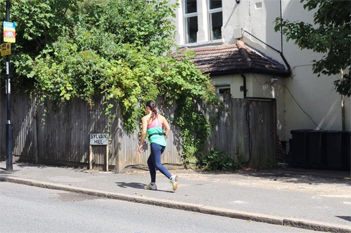 But as anyone who has ever felt the frustration of having someone exclaim to them that 'they've got nothing to be scared of' while in a state of fear knows -- being safe and feeling safe are two very different things. And it’s not just women’s safety that Ms Huq is concerned about, but also their feeling of safety and fear of crime.

This leads to the question of what makes people feel safe in an area, regardless of what the actual level of danger might be.

The established answer to this question came from writer, journalist and urban theorist Jane Jacobs in 1961 in her seminal piece, The Death and Life of Great American Cities.

It was there that Jacobs shared her 'eyes on the street' theory, which has underpinned best-practice urban street design ever since. The eyes on the street theory argues that the more people there are on a street, the safer that street feels to the people travelling through it, as all of those eyes provide informal surveillance that contributes to an atmosphere of security. To put it briefly, if you want a street to feel safe, get people to use it.

A 2021 study in the Journal of Transport and Health showed that investment in walking and cycling infrastructure across the UK led to a 38% increase in pedestrians and a 52% increase in cyclists when compared with the corresponding levels before the infrastructure was introduced.

The streets within schemes like low traffic neighbourhoods are busier with foot and cycle traffic, creating more eyes on the street and a greater atmosphere of safety. So how is it that Ms Huq can claim that these streets will be less safe for women?

She does so off the back of an idea that it’s not pedestrians or cyclists that keep streets safe, but passing motor traffic. Given seemingly daily stories of drivers not noticing things in their path such as pedestrians, signs, and speed limits - the idea that passing traffic will notice and prevent a crime from taking place is difficult to believe.

What is clear from the research is that low traffic neighbourhoods have all the essential ingredients to both keep women safe and help them feel safe too. But, of course, this can still be undermined. One thing that is guaranteed to make women feel less safe in low traffic neighbourhoods is influential figures using their profile and platforms to spread doubt and misinformation about the schemes.

Rupa Huq did just this in the Telegraph, when she repeated refuted and unverifiable claims that taxi drivers are no longer able to drop off women who live in LTNs at their front door.

If Ms Huq is seriously concerned about ensuring perceptions don’t leave women 'feeling trapped and vulnerable,' as she mentioned in her address to parliament last week, the best thing she can do is make sure she knows the research behind low traffic neighbourhoods and that her constituents know it too.

Spreading unnecessary fear and doubt throughout the community will do nothing to help the women of the UK, who already have so much to be concerned about.