Exclusive: Jim O'Sullivan says 'the conventional motorway is over'

The days of the conventional motorway are over and its textbook is set for its last edition, Highways England chief executive Jim O’Sullivan (pictured) told Highways in an exclusive interview. 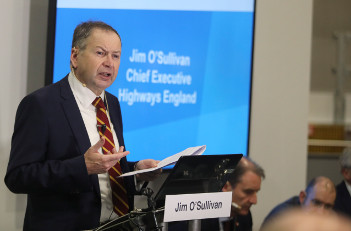 ‘You will either see roads built to expressway standards including emergency refuge areas or, if the traffic volumes are lower or the operating speeds are lower, you will see dual carriageways built.’

Following his keynote speech at Traffex 2019, Mr O’Sullivan confidently predicted a major shift in public perception as he discussed Traffex’s key theme of technology driving change on the network.

‘The public feel very uncomfortable on smart motorways, which we have to accept. But I think we will reach a point where people will be uncomfortable with the idea that they are not on a CCTV camera, where there is not a stopped-vehicle detection system, where they have to stop on a hard shoulder instead of a refuge area.’

Even the way we design and build roads will, to a greater or lesser extent, have been transformed by the end of the Road Investment Strategy (RIS 2) in 2025, he said.

‘This is probably the last time we will revise the DMRB [Design Manual for Roads and Bridges] as a published document because in the future it is going to be as much about rules.’

You can read the full interview in May's edition of Highways.