Highways England is monitoring traffic with a view to easing the impact of its £100m M5 Oldbury Viaduct scheme, following criticism of its approach to traffic management.

It has faced complaints locally, including criticism from Worcestershire County Council that it was ‘creating avoidable traffic delays and frustration’ by ‘imposing unnecessarily restrictive conditions’, particularly further south, where it wants drivers to leave the M5 onto the M42.

A contraflow takes southbound traffic onto the northbound side

Highways England has put its planned contraflow system in place to facilitate the works, between Junctions 1 and 2, with traffic currently using the northbound carriageway and two lanes operating in each direction, along with a 30mph speed limit.

Senior project manager Zbigniew Twarowski said: ‘We understand the concerns of local communities and partners about the immediate impact of our improvement work on the M5 at Oldbury.

‘We’re monitoring traffic on a daily basis as motorists get used to the new layouts and over the coming weeks we’ll be carrying out a further study into traffic flows around Oldbury and the wider area.

‘When we get the results we can then look at anything further we can do to ease the impact on local residents and motorists.In the meantime, we’re continuing to work with partners like local councils as we try to balance the flow of traffic across the region to minimise wider disruption.’ 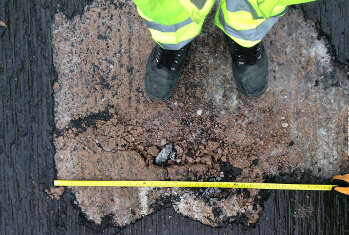 The damaged road surface, prior to the works

Highways England is urging motorists travelling from across the country to consider using the M42 and M6 as an alternative.

It said essential repair work on the viaduct’s southbound carriageway between junctions 1 and 2, including concrete repairs and waterproofing, is well under way. Work currently being undertaken includes planing off the existing surface, removing existing waterproofing and concrete testing.

The target completion date for main work and removal of the contraflow system is Autumn 2018, with completion due in Spring 2019.