An independent review of Highways England’s spending on safety has found that it is inadequate to meet its short-term and long-term safety targets.

Highways England’s monitor, the Office of Rail and Road (ORR), has published a report it commissioned from the Road Safety Foundation (RSF) into How Highways England prioritises investment to improve safety outcomes, which examined safety-related spending in the context of Highways England’s overall budget. 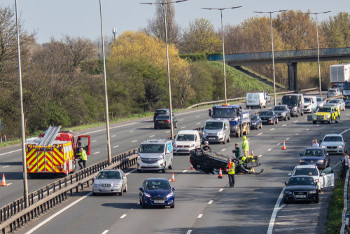 The report concludes that both the company’s target of a 40% cut in killed and seriously injured (KSI) casualties by the end of 2020 and the long-term goal of no one being killed or injured on the strategic road network (SRN) by 2040 ‘are unlikely to be met by current activity’.

‘The current level of SRN investment in specific casualty reduction activity is very small in relation to total road investment. Spending on the legacy RIS1 and RIS2 programmes is focused on a small proportion of the network, not necessarily high risk, with goals of reducing congestion and increasing capacity,’ it states.

The RSF implicitly accepts that Highways England’s safety spending will not change during the second RIS period, which runs to 2025.

It states: ‘However, if the right steps are taken now, the platform that the new Company has quickly built can allow transformation to international best practice by 2030.’

A key finding is that ‘urgent work should begin now generating a RIS3 portfolio with high return safety investment’.

The review also states that ‘Highway’s England’s High Level Safety Performance Framework is World Class’, although this is a description of the ambition embodied in these targets, rather than the company’s ability to meet them.

In fact, the review describes Highways England’s use of safety performance metrics to guide investment to achieve goals and targets as ‘a work in progress’.

It adds: ‘Outside the company’s road safety specialists, this review found that there was a prevailing belief that if long standing procedures were adhered to, the network will become as safe as it can be with unrealistic expectations as to what relatively small “softer” safety programmes, increasing vehicle automation or new design standards, might achieve.'

The report describes softer interventions ‘such as safety communications, working with enforcement agencies and working with businesses’ as essential but states that they ‘will not significantly reduce KSI totals’.

The ORR highlighted Highways England’s use of information campaigns, using unmarked HGV tractor units for enforcement and the Driving for better business campaign alongside ‘small scale safety schemes’ in its Annual Assessment of Highways England, also published this week.