Highways England should take on a policing role, PCC says

Martin Surl said: 'The days when police are tied-up checking heavy goods vehicles, tachographs, the weight of loads - the sort of things a traditional traffic officer used to do - are past. If the police are to focus on more serious issues like organised crime, modern slavery and child sexual exploitation they cannot do it all.' 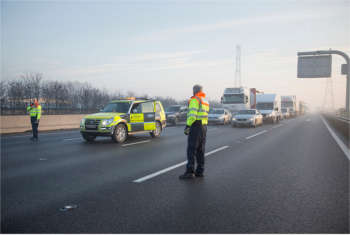 In recent years, MPs have warned that cuts to police numbers have seen driving offences go undetected. In 2016 the Transport Select Committee highlighted that the ‘total number of detected motoring offences...has more than halved during the past decade, from 4.3m in 2004, to 1.62m in 2013'.

Mr Surl added: 'I am not suggesting that policing our roads is not important because it is. It’s a question of priorities and I think that some of the more routine work could be carried out just as effectively by Highways England.

'The police workload is increasing at a time when their numbers and other resources are diminishing. Freeing-up officers from some of their more mundane responsibilities would surely be a good thing.'

A Highways England spokesman told the BBC such a move would need to be approved by the Home Office.

The policing and monitoring roles for roads are arguably more fragmented than in other transport modes such as rail.

Police are responsible for catching offences on roads; however in London and Wales councils can enforce moving traffic violations, a bone of contention for many other local authorities.

The Office of Rail and Road has a much smaller health and safety role in highways, measuring performance against the Road Investment Strategy rather than acting as regulator for the whole industry as it does in rail, with a range of formal enforcement powers including as the crown prosecutor.

For highways, responsibilities are divided between the Health and Safety Executive, who will be in charge of construction areas where road workers are deployed and for incidents taking place on the road involving workers. The local police oversee all driver incidents.

The issue of policing smart motorways has also caused some controversy, with many drivers seemingly unaware of the rules and Highways England resorting to sending out warning letters to offenders.