Work to build two junctions at the site of a new village at in Nottinghamshire is underway, with local firm McCann commissioned to deliver the highways elements.

The two junctions at Top Wighay Farm near Linby are to provide access into a planned new village, which is a flagship project for Nottinghamshire County Council. 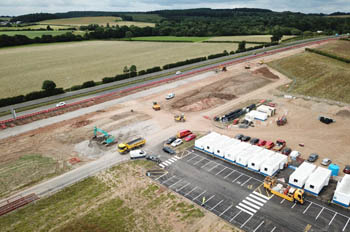 It has commissioned Arc Partnership to deliver the project, working with Balfour Beatty, Scape Group and Via East Midlands.

The 40-hectare site will see 805 new homes, as well as a primary school, shops, playing fields and energy-efficient offices.

The works to create the new junctions and associated highway infrastructure are being led by Balfour Beatty in partnership with Nottingham-based civil and electrical engineering company McCann.

The highways works, which have a completion date of Spring 2021, include the expansion of a roundabout on the A611/Annesley Road, a new signal controlled junction and a three-metre wide footpath and cycle lane running to the north of Hucknall and west of Linby.

McCann construction director Adrian Cronin said: ‘Given the current climate, the timing of this project is fantastic because it shows that despite everything else, significant investment is still being made to improve the local economy, create jobs and improve local infrastructure.'

‘We’re delighted to be partnering with Balfour Beatty on the completion of essential highways works having worked together on numerous other projects previously. Our strong collaborative approach will ensure successful delivery as part of this transformational scheme for Nottinghamshire and provide highways and infrastructure built to accommodate this exciting new village location.’

Nottinghamshire CC leader Kay Cutts MBE said: ‘The Top Wighay Farm development is one of the most ambitious projects ever undertaken by the county council. It will boost the county’s economic growth and will regenerate an area at the heart of our county, benefiting not only the current population but many generations to come.’

The works are being funded through a £5.8m grant from Homes England alongside a £3m investment by D2N2 local enterprise partnership - with additional funding provided by Nottinghamshire CC.