The prime minister and the Department for Transport (DfT) have unveiled an extensive active travel strategy, with wide ranging reforms to revolutionise cycling infrastructure and prioritisation.

The aim is to have half of all journeys in towns and cities cycled or walked by 2030, backed by the initial £2bn for active travel announced in May.

The package of reforms cover legal, design, health and governance issues and represent the Government's largest concerted effort to close the gap between England and more celebrated cycling nations such as the Netherlands. 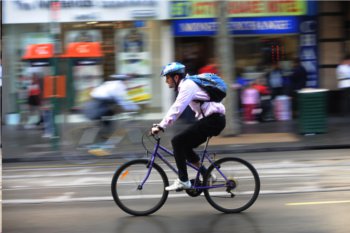 Among the core announcements are several that local authorities have been pleading for over many years, including devolving powers to enforce moving traffic violations to the rest of England outside London - where it is already devolved - and releasing new cycling infrastructure design guidance (Local Transport Note 1/20).

A new body, Active Travel England, will be created in the next few months with powers similar to Ofsted's, and a responsibility to investigate and publically rate a local authority's active travel performance. Failing to provide proper cycling infrastructure could result in the loss of cash for other transport schemes.

PM Boris Johnson said: 'We announced in May £2bn of new funding for cycling and walking – representing a sixfold increase in dedicated funding, the biggest increase this country has ever seen

'That will pay for first hundreds, then thousands of miles of protected bike lanes, so anyone can ride safely; low-traffic neighbourhoods, to stop rat-running and make it easier to walk and cycle; bus and bike corridors on some main roads; and funding for a massive rise in e-bikes, all of which will open up cycling to more and different people and make places better for everyone.

'There will be vouchers to pay for bike maintenance, free cycling training for everyone who wants it, and parking changes to discourage the school run.'

The Government has also announced a consultation on reforms to the Highways Code introducing 'a hierarchy of road users which ensures that those road users who can do the greatest harm have the greatest responsibility to reduce the danger or threat they may pose to others'.

The proposed changes would also clarify 'existing rules on pedestrian priority on pavements and that drivers and riders should give way to pedestrians crossing or waiting to cross the road'.

And the government plans to establish guidance 'on safe passing distances and speeds when overtaking cyclists or horse riders, and ensuring that they have priority at junctions when travelling straight ahead'.

These rule changes would be supported by the introduction of a new offence of 'causing serious injury by careless, or inconsiderate driving' and an increase to the maximum sentence for causing death by dangerous driving or careless driving when under the influence of drink and drugs.

The strategy also sets out plans for the NHS to start prescribing bikes.

'A stock of cycles would be available to lend, with training, access to cycling groups and peer support; in some cases, if they used them enough, patients would be allowed to keep them,' it said.

As well as these structural and legal changes, the DfT is taking a new strategic line on cycling insisting on segregated lanes and continuous routes and refusing to fund or part fund paint-only cycle lanes: 'We would rather do nothing than do something inadequate.'

Cyclists will now be treated as vehicles with their own specific share of the road. To inform decisions on the reallocation of road space, the DfT will conduct street by street audits of a number of key routes, including in smaller towns.

Ministers will also consult on creating a community right to close side streets and create low-traffic neighbourhoods, with groups of residential side streets able to petition local authorities for rat-run closures.

The cycling budget will be held by a new commissioning body and inspectorate, Active Travel England, led by a new national cycling and walking commissioner which will be established in the next few months.

Active Travel England will examine all applications for funding and refuse any that are not compliant with the new national standards. It will inspect finished schemes and ask for funds to be returned for any which have not been completed as promised, or which have not started or finished by the stipulated times

From next year, Active Travel England will also begin to inspect, and publish annual reports on, highway authorities, whether or not they have received funding from us, grading them on their performance on active travel and identifying particularly dangerous failings in their highways for cyclists and pedestrians.

Active Travel England’s assessment of an authority’s performance with respect to sustainable travel outcomes, particularly cycling and walking, will be taken into account when considering funding allocations for local transport schemes.

It is our intention that the commissioner and inspectorate will in this regard perform a similar role to Ofsted from the 1990s onwards in raising standards and challenging failure.

Whitehall will 'commence the remaining elements of Part 6 of the Traffic Management Act 2004, allowing local authorities, rather than the police, to enforce against moving traffic offences such as disregarding one-way systems or entering mandatory cycle lanes'.

The government will issue guidance to local authorities about the powers 'including on the importance of ensuring citizens are properly informed about them and the need for traffic signing to be properly designed and placed, so that it is clear to drivers what restrictions are in force'.

DfT officials propose that 'motorists be issued with a warning for a first offence, and fines for subsequent offences'.

One focus of these new powers is to create more 'school streets'. The new powers will enable effective enforcement of school streets outside London, by giving local authorities the powers in part 6 of the Traffic Management Act 2004.'

'Under these schemes, during term time, local authorities close streets to through traffic and have parking restrictions at school pick-up and drop-off times. Access is maintained for residents and other requirements, such as to drop off children who may have mobility difficulties and cannot walk far.

I've had a quick look at LTN1/20 this morning & it's pitched where I expected it to be. If followed, we should see better layouts, although there's stuff in there which is out of date. Best line I've seen "All designers of cycle schemes must experience the roads as a cyclist."

New design guidance for cycling infrastructure has also been issued after a wait of over a decade. The DfT has issued 22 summary principles to the guidance. These include

The DfT will work with the Ministry of Housing, Communities and Local Government and the Local Government Association 'to place cycling and walking provision at the heart of local plan making and decision taking for new developments'.

One of Active Travel England's functions will be as a statutory consultee within the planning system to press for adequate cycling and walking provision in all developments of over a certain threshold, and provide expert advice on ways in which such provision can be improved.

Ministers also pledged to 'consider the role the emerging National Model Design Code and revisions to the Manual for Streets can play in delivering high quality, accessible, secure and safe cycle storage'.

'In one or two small historic city centres with narrow and crowded streets, we will pilot compulsory freight consolidation schemes, based on experience from the Continent, which seek to ensure that all deliveries (except perishables and items which require specialist carriers) are made to consolidation centres on the edge of the city centre, or the edge of the city, then taken to their final destinations in a far smaller number of vehicles, including cargo bikes and electric vans wherever possible

The DfT announced it is looking for 'at least one small or medium-sized city which wants to create a zero-emission transport system, with extensive bike lanes, an all-electric (or zero-emission) bus fleet, and a ban on nearly all petrol and diesel vehicles in the city centre, with deliveries made to consolidation hubs and the last mile being done by cargo bike or electric van'.

The initiative could be done in conjunction with the existing competition for an all-electric bus town.

Ministers will choose 12 willing non-London local authority areas to benefit from intensive investment in mini-Holland schemes similar to ones already launched in the capital.

'The main focus will be on replacing short car trips. They must be places where cycling is currently low and where there is serious political commitment to dramatic change – not just for cyclists, but for everyone who lives and works there.'