The long read: Road marking research - the bad, the good and the controversial

The first large scale study of how modern road markings react with typical road surfaces has thrown up some bad news, some good news and some controversial issues. National Highways is considering a shake-up of its road marking works, but other key voices have their doubts. Dominic Browne reports.

As reported in Highways (March 2021), National Highways (then Highways England) in partnership with Roadcare and Kier has been working on a £685,000 international road marking innovation competition over the last few years. The results are now in and published in Transforming Road Markings Competition – Final Report.

The traditional method for developing new road marking products in the UK is on-road testing, though no such tests have been carried out for at least 10 years – a bone of contention we will return to. This means the competition is the first to be based on typical open texture surfaces, now found on the majority of the strategic road network (SRN), because no on-road tests were carried out since the transition from hot rolled asphalt – making it ‘the first large scale study of how modern road markings react with typical road surfaces’.

Laboratory-based ‘wheel over’ testing reduced more than 30 entries to seven finalists, that were then tested on-road for wet and dry retroreflectivity, skid resistance and contrast over a two-year period on the M5 northbound between junctions 20 and 18.

When it comes to securing easier removal of road markings the research was a limited success: ‘The removal trials, while not identifying any innovative methods other than variations on the use of water pressure did show that consistent results could be achieved where crews are given sufficient time to deliver what is expected of them, which isn’t always the case.

‘The predominant methodology uses high pressure water blasting. While we are seeing rapid development in some aspects of this technique, such as innovation in the design of the removal heads, lack of control systems means that the quality of the finish achieved is influenced by a combination of time allowed to carry out removals, the skill of the individual operative and the quality of the underlying road surface. If any of these is not at the optimum level, the results can be costly.

‘The best results were achieved on a thin spray applied marking rather than the more widely used extrusion method of application. All removals at present however will impact on surface texture to some extent and have the potential for ghost markings, particularly in low sunlight.’

It adds: ‘One idea that merits further exploration was the use of a wider black base line below the markings themselves. While providing the added bonus of increased contrast, which is of growing importance with the potential for autonomous vehicles, it fills the voids in the road surface meaning that the markings when removed do not impact on the bitumen thereby protecting the pavement surface.’ 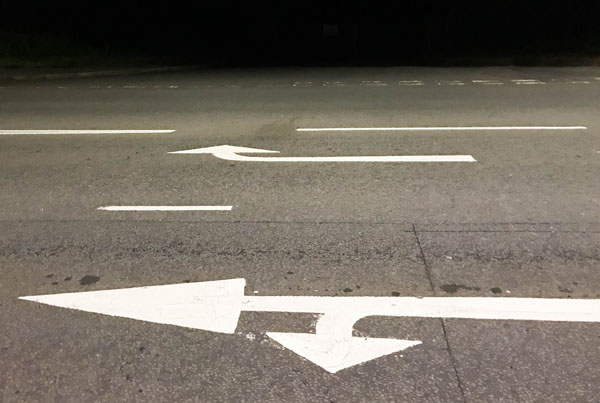 The report identified a need to ‘consider developing more comprehensive removal requirements that include the quality of the road surface left behind’.

‘The current specification (EN BS 16958:2017) considers the area of marking to be removed but does not specify the quality of the remaining surface after the removal. Setting parameters, using a measure such as surface texture, would help to adopt a more holistic approach to the asset management of the road surface post removal and discourage over-zealous removal. This would need to be monitored for compliance. Further research would be needed to understand the long-term impact on road surface longevity.’

The tests found ‘that road marking products have developed significantly and offer the potential for much higher performance than currently specified in UK standards’.

In fact, so much progress has been made that National Highways is considering raising its technical standards.

‘Based on our data, we have shown that there are several products that can deliver dry retroreflectivity of 200 millicandela (mcd) which is the current (minimum) standard for four lane motorways. Based on the results from the trial, there is the potential that the wet night-time retroreflectivity could be increased to 50mcd from the current minimum standard of 35mcd. If accepted, this increase in standard could provide safety benefits by giving drivers an increase in time to react to the markings.

‘All seven of the finalists that finished this competition have demonstrated these higher levels of performance both in laboratory testing and on-road testing.’

However, the report also states: ‘During the period of the competition, we observed certified products failing prematurely. One approach to address this could be a staged payment system within contracts to drive improved quality in construction and assure levels of performance.’

The importance of road markings should be elevated throughout the supply chain as ‘the application and removal are often the last things to be delivered on a night shift’ leading to ‘over aggressive pressures that damage the surface as crews do not have the time to care for the asset in the way that we all need.’

A point that is likely to surprise those outside of the markings industry is that, despite the array of products on offer, there appears to be little effort to target best value solutions. The report notes that the tendency is to adopt a one-size-fits-all approach and use the same materials regardless of whether the marking is permanent, temporary, heavily or lightly trafficked.

It adds that National Highways should ‘engage with the industry, and in particular designers, about the variety of materials that can be specified’.

Progress is being made already, as since the start of the competition there has been much better use of paint and spray products for temporary markings by suppliers.

The report highlights: ‘Weather conditions can play a key part in influencing which product is utilised and thermoplastic is the most adaptable material across all weathers. Where weather conditions are right (generally dry and above 5 Degrees Centigrade) however, paint offers good potential for temporary markings as they can be reactivated and removed at low pressure with minimal surface damage.

‘Equally, cold plastics offer the potential to be longer lasting and without the safety and environmental issue of having to heat the materials, but again are susceptible to weather conditions. There are also efficiency benefits to consider with parts of the network that are not susceptible to traffic (eg chevrons at junctions) not needing to be as thick as they are currently applied. Indeed, a thin spray material gave the best all round performance in the competition and offers the benefit of greater network coverage per unit of material.’

Finally, the report says that consideration could be given to alternative and faster testing methods to encourage innovation. ‘The results in this report show that there are potentially alternative methods to the traditional on-road testing that can prove performance and longevity. Adoption of new testing methods could bring products to market much quicker and avoid the need for disruption to the network through road closures associated with on-road tests. They must reflect the surface textures used on the SRN however rather than flatter surface textures, as well as reflecting vehicle speeds on the SRN.’

This final recommendation brings us to the controversial element.

Firstly, it is worth noting that the Road Safety Markings Association (RSMA) has been trying for many years to secure on-road testing of new products with National Highways and previously Highways England, and even the Highways Agency before that.

Some in the sector might be just a little frustrated to hear a call for more to be done on innovation from the group which seems to have been blocking it for years now.

Aside from that, the RSMA, which is the central trade body representing installers and manufacturers of road marking products used in the UK, has raised ‘significant concerns about the methodology used in this report and results obtained during the on-road element of the competition’.

As a result, the RSMA disputes the conclusions. Stu McInroy, RSMA CEO said: ‘I am particularly concerned that the methodology employed during the on-road testing element, in particular the positioning of the products, failed to produce quantitative data on the wear to which products were exposed. As a result, no technically sound basis exists from which can be established the performance of individual products or comparative performance between different products.

‘In addition, I believe that in attempting to establish a link between the comparison of road marking products on the AETEC wear simulator and flawed performance conclusions drawn from the on-road element of the TRM competition, where none exists, the report fails to provide a reasonable basis upon which to make policy decisions and to do so would, in my opinion, be irrational.

'The RSMA supports fully the National Highways desire to increase the number of products available to it for application to the SRN and decrease the lead time for certification of products, has highlighted to NH its concerns and stands ready to discuss its position with NH representatives.’