The much-anticipated smart motorway stocktake has been released by the Department for Transport (DfT), including an action plan on how to improve safety on the controversial roads.

Following a number of fatalities on smart motorways, transport secretary Grant Shapps called for the stocktake in October last year. 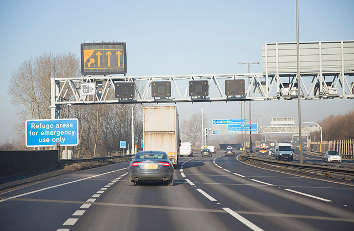 The Government concedes that 'some risks are higher on smart motorways than conventional motorways, for example the risk of a collision between a moving and stationary vehicle', but says that others are lower, including tailgating, rapid changes of vehicle speeds, vehicles drifting off the carriageway and vehicles being driven too fast.

The action plan provides an 18-point package of measures 'to improve safety and public confidence' including confirming the end to 'dynamic hard shoulder' motorways - where the hard shoulder switches in and out of being a live lane - 'to end confusion'.

The package of measures also calls for action on speeding up the roll-out of stopped vehicle detection;

'A radar-based system which spots stationary vehicles will be installed across the entire smart motorway network within 36 months,' the DfT pledged.

Highways England has previously committed to this but declined to give a timescale. Last year chief executive Jim O'Sullivan told MPs: 'Refitting it and productionising it so that you can roll it out over hundreds of miles as a retrofit programme is quite a challenge.'

It is also unclear whether retrofitting existing technology will address some of the issues around its effectiveness in different traffic conditions, particularly in high levels of traffic.

The DfT stated: 'Highways England has been investigating other technologies for detecting stopped vehicles and has run a small-scale trial of a system that analyses CCTV images. As a result of this evidence stocktake, Highways England will launch a large-scale trial of this technology. This will make greater use of the full CCTV coverage on smart motorways, providing another option alongside current radar technology.'

Mr Shapps also called for the distances between refuge areas to be reduced from 1.5 miles to three quarters of a mile; however the Government only commits to doing this 'where feasible' and on 'future schemes'.

AA president Edmund King said: 'For the last decade we have been campaigning to improve the design and safety of "smart" motorways. The measures announced by the transport secretary today are a victory for common sense and safety.

'We applaud Grant Shapps for instigating the review and taking this issue very seriously. We believe the intention to place ERAs at every three-quarters of a mile is a great outcome and what we have called for over the last decade.'

RAC head of roads policy Nicholas Lyes said: 'Two-thirds of drivers tell us that they believe permanently removing the hard shoulder compromises safety in the event of a breakdown.

'While it is welcome that the Government has listened to their concerns and undertaken this review, it remains to be seen whether these measures go far enough to protect drivers who are unfortunate enough to break down in live lanes.'

Mr O’Sullivan said: 'We will be taking forward the measures the secretary of state for Transport has set out, and we will be improving further our information to drivers to help them be safer on all of our roads, including our smart motorway network.'

Simon Morgan, an expert in signage, said: 'The report doesn't address the alarming rise in near-miss incidents reported in the media that apparently related to the change to all-lane running on sections of the M25.

'I think this rise may have been more to do with the presence of road works and not the change in lane usage, but it would be nice to know. As well as the better enforcement of 'Red X' mentioned in the report, we also need more intelligent information for motorists - such as can you enter a Red X lane if you break down on All Lane Running, rather than stopping in a live lane, and what about a Red X above lane 1 just before a slip road exit (which I have now seen 3 times)?'