Highways England is to impose a permanent 30mph speed limit in a village suffering high air pollution after a trial achieved an improvement.

Last year Friends of the Earth named Chideock Hill as experiencing the worst air pollution in England, with annual average level of 97.7ug/m3 of Nitrogen Dioxide (NO2) against a legal limit of 40ug/m3. 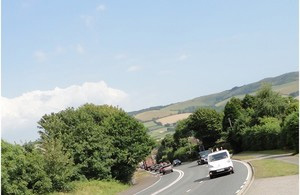 Chideock has been identified as an Air Quality Management Area by Dorset Council. Highways England said that, working closely with the local authority, it initiated a trial speed limit along a section of the A35 at the western end of the village in September 2019.

Andy Roberts, Highways England Route Manager for the A35, said: ‘As part of our ongoing work, we undertook and completed a trial which saw additional diffusion tubes installed and an electric-powered van monitoring real-time pollution before and after the speed limit change.

‘This identified a small reduction in nitrogen dioxide levels following the reduction of the speed limit and as a result of the localised air quality benefit, we propose to make the extended 30mph zone a permanent fixture.’

He added: ‘We have also funded and delivered an electric vehicle charging point in the village, and although the air quality challenge will ultimately be solved at the tailpipe by vehicle manufacturers and changes in vehicle use, we will continue to work with Dorset Council and monitor air quality.’

Ray Bryan, Dorset Council portfolio holder for highways, travel and environment, said: ‘I’m pleased to hear that the speed trial in Chideock has gone towards helping improve the air quality in the village, and the 30mph speed limit is in the process of being made permanent.

‘Due to the challenging topography of the village, the solution to improving air quality on this strategic route depends largely on wide-spread adoption of clean technology and other changes to travel habits.'

Friends of the Earth campaigner Jenny Bates told Highways: ‘Chideock will benefit from any cut to air pollution but a timid reduction to the speed limit, and space for just one electric vehicle charging point isn’t going to clean up the toxic air breathed by people living there.’