A joint venture working under the London Highways Alliance Contract (LoHAC) has lost a High Court battle with Transport for London (TfL) over work rates.

Colas, VolkerHighways and AECOM (CVU) disagreed with TfL over payment rates in conjunction with the capital's permit scheme, which imposes charges for working on roads during peak hours. 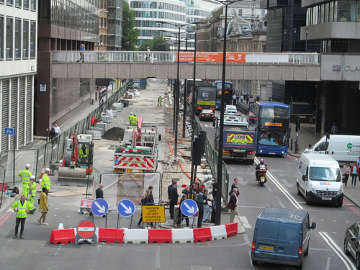 CVU said it had understood there would be a window for night-time noisy works between 7.30pm and midnight but in practice this was severely curtailed by permit conditions.

CVU argued that it was therefore entitled to claim for the cost impacts of the restriction with revised rates and prices. TfL maintained that agreed rates and uplifts in the existing deal covered all limitations or restrictions on working conditions.

Justice O’Farrell said: 'CVU makes a valid point that the framework agreement does not contain definitive hours and other conditions in which the works under task orders must be carried out.

'That introduces uncertainty as to the duration, scope and cost of work required. Any requirement by CVU to price such uncertainties would result in uncommercial high rates. There is a risk that contractors could include a premium for the risk of uncertain restrictions on working if forced to price them at the outset.'

'The purpose for which the schedule of rates was required was to provide consistency and certainty in the pricing of the works. The use of a schedule of rates enabled TfL to evaluate the tenders on a fair and equal basis. The fixing of rates and prices for the framework agreement provides opportunity and risk for both parties.

'It was a matter for each party to assess the risks associated with permits issued and to price those risks accordingly.'

CVU is in talks with TfL about removing itself from core work under the LoHAC framework; however this relates to cut backs in Transport for London's roads spend and has nothing to do with this court case.

A spokeswoman for CVU said: 'CVU would like to reiterate that they are in discussions with TfL to consider stepping down from core work in the central London area. This action was agreed prior to the result of the recent court case being announced, and is in response to the removal of the government operating subsidy.'