A ‘clever little robot’ has saved hundreds of hours of working time on projects across the country, Highways England has said.

The machine uses precise positioning technology to mark out where white lines need to be painted on new or resurfaced roads. 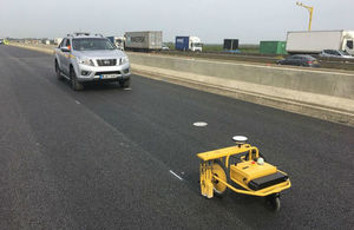 The government-owned firm said the ‘quirky’ piece of kit has already been used on the £1.5bn A14 Cambridge to Huntingdon improvement, which is Britain’s biggest road upgrade.

It also recently pre-marked eight miles of the M6 in Staffordshire in four hours. Highways England said this would usually take two engineers over a week to complete.

Julian Lamb, construction director on the A14, said: ‘We’re always looking at innovative new ways of working, which can help road users, and make our projects more efficient while supporting improved engineering.

‘With safety our top priority, the time savings the robot can provide, coupled with removing our operatives from a potentially hazardous situation, make it a great solution.’

Highways England said savings elsewhere include saving 27 hours of working time marking three miles of hard shoulder on the M4 in Berkshire, 77 hours covering five miles of the M6 in Warwickshire, and six hours working on two miles of the M1 in Leicestershire, with further work done on the M60 smart motorway at Manchester.

It said pre-marking road markings is usually a time-consuming job, calculating the positioning of the markings and walking several miles to spray or chalk them on the road, but that with the robot road workers spend far less time in the road and are at less risk.

Around 250 drivers illegally drive into roadworks every month.

Bending down to pre-mark roads by hand can also raise the risk of back injuries, Highways England said. It added that the robot also boasts improved accuracy.

Specialist roadmarking contractor WJ, which adopted the technology, has now invested in a second robot to help complete more of its work.

WJ Group managing director Wayne Johnston said: ‘I am passionate about changing the way we work in this industry and the WJ Robotic PreMarker represents a real step change.

‘However, it is just a starting point, we will continue to invest in research and development to find better, more efficient and safer ways of working.’