Campaigners have accused National Highways of continuing work to prepare for the demolition or infilling of historic rail bridges, despite claiming the programme has been paused.

The HRE Group said the government-owned company, which manages more than 3,100 disused railway structures on behalf of the Department for Transport (DfT), has awarded 14 contracts in five weeks, despite ministers pausing the works in July.

It said the programme is expected to resume in the next few weeks, with 68 structures in the Historical Railways Estate (HRE) under immediate threat.

According to the group, tree felling, drainage, access and ecology works have been authorised at sites from Dorset to East Lothian, as contracts worth a total of £192,000 were awarded between 21 September and 25 October.

HRE added that utility investigations and tree felling works priced at £36,758 have been completed on the site of a bridge demolition project in Dorset.

On 11 August, three weeks after ministers paused National Highways’ works programme, the company’s engineer told a Dorset Council official: ‘We are proceeding with all of the background works as if [the demolition] were continuing’. 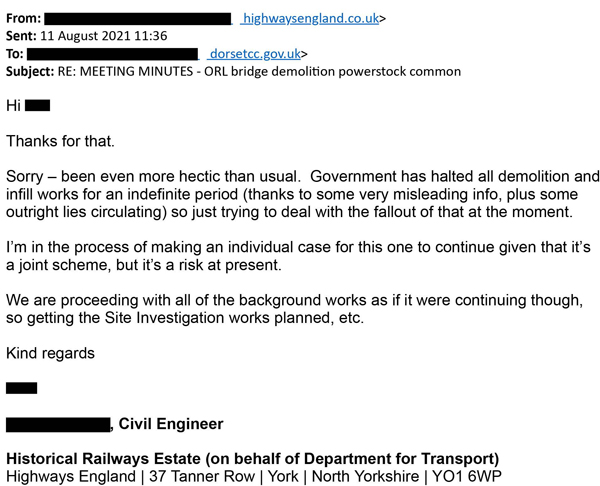 Graeme Bickerdike, a member the group, said: ‘The engineer’s comment reflects a determination within National Highways to push ahead with its damaging schemes. The awarding of these contracts demonstrates a clear direction of travel and undermines the ministers’ intervention.

‘The so-called pause is just smoke and mirrors.’

The group also pointed to preparatory works valued at £5,246 for infilling a structure needed for an extension of the Watercress Way in Hampshire, with vegetation being cleared within the footprint of the proposed scheme.

In Gloucestershire, £55,371 has been committed to drainage works at two bridges between Fairford and Lechlade-on-Thames, ahead of proposed infill projects.

The group said there was a longstanding hope tp reopen the old railway spanned by the structures as a cycle route.

It also claimed that cracks were filled in a bridge within a conservation area at Barcombe, East Sussex at a cost of £14,096, to prevent bats roosting. A vigorous community campaign has been launched to resist an infill scheme which would block an established wildlife corridor. Contracts worth £246K have also been awarded for the main works.

Local campaign organiser Hazel Fell Rayner said: ‘Passers-by who saw contractors on site were told they were conducting a bat survey - only to find bat exclusion measures had been installed on the bridge immediately after. It seems underhand, dishonourable and to take communities for fools, giving false reassurance that the scheme is paused whilst charging ahead with the removal of wildlife and habitat from sites.’ 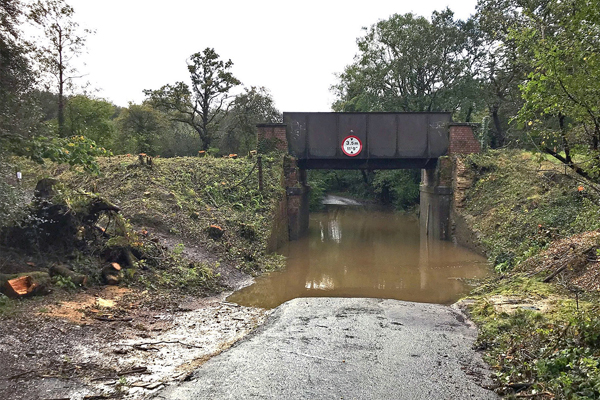 ‘However we continued with vegetation and ecology work on a number of structures. This is good practice and will keep structures safe. This work will be required irrespective of any decisions regarding the future of these structures.’

National Highways said there will be no immediate reinstatement of the infilling and demolition works and that even if the pause is lifted point in future, all potential major work schemes that may require such intervention will be reviewed by the Stakeholder Advisory Forum and planning permission sought ‘where appropriate’.

Mr Bickerdike said the group has ‘low expectations’ of the forum, which it said currently has no heritage rail, environmental or ecological representation, with five of its nine members from National Highways or the DfT.