The Government appears to have abandoned its commitment to create a National Roads Fund (NRF) through the hypothecation of vehicle excise duty (VED), undoing a long-standing promise without informing MPs or the public.

The move to quietly drop hypothecation comes hand-in-hand with a shift of billions of promised funds away from the local network to the national network, raising fears for the survival of the major road network (MRN) concept.

When the RIS 2 was published in March this year, the document stated: 'Funding for this plan is directly linked to the money road users pay. For the first time since 1926, a new National Roads Fund (NRF) will dedicate a sum equal to all receipts from Vehicle Excise Duty (VED) for use on our most strategically important roads. Not only does this provide the security of a long-term funding stream, the link reinforces our ambition for greater customer service and responsiveness to users.'

The recent Spending Review made no mention of the long-promised NRF and when asked directly by Highways, the Treasury declined to deny that it had abandoned the idea. 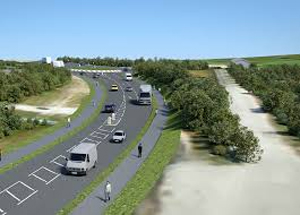 With the loss of the fund, the Government appears to have also dropped a flagship pledge to spend £3.5bn of VED over five years on upgrades to English local roads.

Despite repeated requests from Highways, the Department for Transport and the Treasury have both declined to confirm that the pledge remains Government policy.

Neither the Spending Review nor the National Infrastructure Strategy mentioned the NRF, or the MRN – a key funding source for local road upgrades alongside the Large Local Majors funding stream.

The NRF was first formally announced in the 2018 Budget to ‘deliver on the Government’s commitment to hypothecate English Vehicle Excise Duty to roads spending’.

It was clearly stated that ‘£3.5bn of [the NRF] is expected to be spent on local roads’.

However, Highways understands that DfT officials are no longer able to confirm to local authorities and other stakeholders that this amount will actually be available to fund regional MRN and Large Local Major programmes.

When RIS 2 was published earlier this year its budget was increased to £27.4bn to cover the extra cost of the A303 Stonehenge Tunnel and the roads for the Lower Thames Crossing, potentially leaving as little as £1.5bn for local road upgrades.

The Department for Transport has told Highways that it remains committed to the MRN but did not confirm that this would be funded through the NRF.

When asked to confirm that NRF funding for local road upgrades would still amount to £3.5bn over five years, it pointed out that the Spending Review repeated the commitment to spend £27.5 billion (sic) on RIS 2.

A Treasury spokesperson said: 'At this year’s Budget we increased the total amount of funding provided over the next five years to be spent on roads to over £29bn, far exceeding the original amount committed to the [National] Roads Fund, supporting the UK to build back better.'

Is the local cupboard bare?

Recently government announcements – or the lack of them – have added to fears that there is very little cash for local schemes.

Funding decisions are still awaited for the vast majority of a large number of schemes submitted by sub-national transport bodies for what would have been NRF funding at the Government’s invitation in July and August 2019.

The National Infrastructure Strategy cites approval for three schemes in support of an assertion that: ‘The Government is also investing £310m in 2021-22 in upgrading the road network.’

Only two of these schemes are Large Local Majors and one of those was approved under the 2015-20 funding round. A third is funded through the Local Growth Fund (LGF) – an entirely different funding pot.

The North Hykeham relief road – a Large Local Major given ‘programme entry’ approval – is the only scheme submitted last year that has had funding (£110m) allocated.

The two other schemes, crossings at Great Yarmouth and Lake Lothing that have been awarded £98m and £73.4m respectively, are longstanding schemes that have now been given final approval.

The new crossing at Great Yarmouth was approved for £98m Large Local Majors funding in November 2017.

The Lake Lothing crossing in Lowestoft is funded through the Local Growth Fund and was in fact cited in the Government’s 2016-21 National Infrastructure Delivery plan.

This year ministers have also announced funding for two MRN schemes – at York and in Cumbria – that then transport secretary, Chris Grayling, announced in 2018, as well as £60m for a section of the North Devon Road Link – a Large Local Major for which funding was agreed in 2018.

At this year’s Spring Budget, it was announced that 15 of the MRN and Large Local Major schemes submitted last year, including the A39 at Camelford (pictured above), would ‘proceed to the next stage of development’ but with no guarantee of capital funding.