Highways England has met its reduced target for the delivery of major schemes but must do more to improve safety on its network, the strategic roads regulator has said.

The Office of Rail and Road (ORR) has published its Annual Assessment of Highways England, which is subtitled ‘End of Road Period 1 [RP1] 2015-2020’, reflecting the fact that 2019/20 was the last year of the first Road Investment Strategy (RIS 1).

It said Highways England has delivered the majority of its commitments and made good progress over the first road period, but added that the original programme set out for major improvements was too optimistic.

The ORR also said the government-owned company must continue to improve safety for all road users, further involve its customers into planning and decision making, and work even more efficiently over the second road period.

Chief executive John Larkinson said: ‘Over the last five years Highways England has made very good progress and we have seen it meeting almost all of the targets it was set. We have pushed Highways England hard to deliver on safety, efficiency and meeting the needs of road users.

‘Highways England’s task is going to get bigger, as it needs to deliver a larger programme of works set out in the Government’s 2020 Road Investment Strategy, and we will continue to provide close scrutiny.’

The ORR pointed out that it had made a number of observations on the delivery risk of the RIS 1 programme, which saw substantial ‘re-planning’ from 112 schemes that were due to have started construction in the first road period to just 73, agreed with the Department for Transport.

Of these schemes, Highways England started work on 67, provided funds on two schemes for a third party to start work, and missed its commitment on four schemes.

It added that re-planning also addressed concerns it had raised over disruption to road users.

On safety, the ORR said ‘further hard work’ is required if Highways England is to meet its safety target for 2020; and further investment is needed to meet its longer-term goal, that nobody should be harmed on the network by 2040.

The government-owned company has a key performance indicator to reduce the number of people killed and seriously injured (KSIs) on the SRN by 40% by the end of 2020, against a baseline of the 2005-09 average.

The ORR pointed out that Highways England’s performance against this safety target will not be known until summer 2021, adding: ‘Provisional data for the first six months of the year indicates that further reductions may have been achieved in 2019, but we must wait for the publication of the data by DfT before drawing conclusions.’

It also noted that traffic on the SRN is expected to be significantly lower than previous years in 2020 and early indications that road traffic casualties have also declined, ‘which increases the likelihood that the company will meet its safety key performance indicator for RP1. However, any significant reduction in casualties in 2020 is likely to be temporary.’ 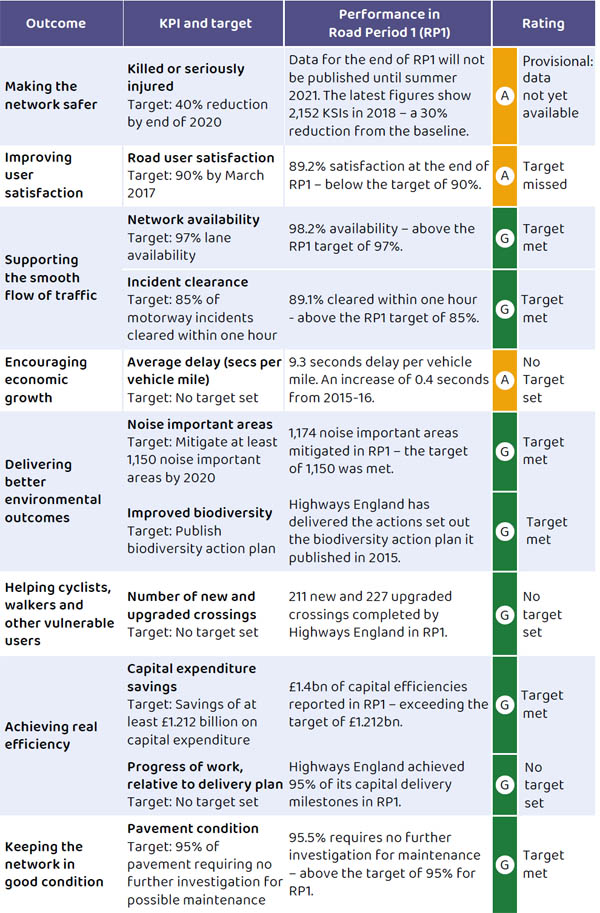 The ORR said it has played a vital role to improve the transparency and quality of Highways England’s financial reporting – with the company delivering £1.4bn efficiency savings over five years. It has previously questioned the company’s claims to have delivered efficiency savings against a backdrop of cuts to schemes.

It also said it had ‘pursued an overdue backlog of structures inspections, as well as relentlessly monitoring Highways England’s work to improve road users’ experience following aspects of poor performance’.

The ORR acknowledged that Highways England had actually missed its target for road user satisfaction – achieving 89.2% at the end of RP1 against a target of 90% – but said it had ‘demonstrated an increased focus on meeting the needs of road users’.

Highways England met its target for keeping the network in good condition. At the end of RP1 pavement condition was 95.5%, above the target of 95%. The ORR described this as ‘significant progress from when the target was missed in the first two years of the road period’.

Highways England also met its RP1 targets to support the smooth flow of traffic on the network. The company’s performance was measured by two key performance indicators in this area – network availability and incident clearance.

Highways England chief executive Jim O’Sullivan said: 'Since 2015 we have delivered the Government’s first Roads Investment Strategy. This has supported economic growth, and the creation of housing and jobs right across England.

'It has also created new cycling routes, environmental improvements, and addressed a large number of noise and other community concerns.

'Over the next five years we will build on those outcomes with a further portfolio of investment to maintain and operate the network safely, provide new capacity where it is most needed, protect the environment and communities, and drive the economy.

'We value ORR’s feedback and will continue to work with them as we create a sustainable road network that meets the country’s future needs.'

£29,636 - £33,799
We are looking for a Highways Liaison Officer to join our Communications and Liaison Team. Milton Keynes, Buckinghamshire
Recruiter: Milton Keynes Council

£29,636 - £33,779
We are looking for a Clerk of Works to join our expanding team, supporting the Senior Engineers to... Milton Keynes, Buckinghamshire
Recruiter: Milton Keynes Council

Negotiable
OverviewThis is your chance to make a lasting impact on our county. From developing the connected transport networks of the future and driving sustain England, Buckinghamshire, Aylesbury
Recruiter: Buckinghamshire Council

£30,000 per annum
We are seeking a fully trained HGV technician to work as part of the team who maintain the Council's fleet to the highest standards.  Chelmsford, Essex
Recruiter: Chelmsford City Council
Tweets from https://twitter.com/highwaysmag/lists/industry-tweets