Highways England has announced plans to remove a 150-tonne section of concrete bridge across the M6 in one piece to make room for an all lane running smart motorway.

The Creswell Home Farm bridge north of Stafford, which is almost 250ft in length, will be dismantled and the centre section lifted clear and taken away in one piece to a nearby compound on a 90ft long specialist transporter. 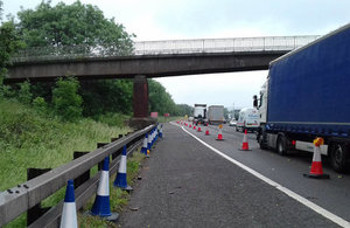 The bridge (pictured), which is no longer in use, is too low for the required safety clearance when the hard shoulder becomes a running lane.

Smart motorways project sponsor Peter Smith said: ‘This is part of our plan to ultimately improve journeys in this area by adding extra capacity and technology to the motorway.

‘Demolishing it is a big and complex job and to do it safely we need to use both carriageways of the motorway, which means it will be closed for up to 24 hours.

‘We’re doing all we can to minimise disruption though and that is why we are arranging to take the centre section away in one piece, rather than breaking it up, which would take more time.’

Other sections will be taken away later. The old bridge will be recycled and used in the construction of the upgraded motorway.

The bridge, which is just north of junction 14, was built in 1961. Highways England said that removing it will provide extra space to increase the capacity of the northbound entry and southbound exit slip roads and make them safer, as well as removing an unnecessary maintenance liability.

While work takes place, the M6 between Stafford (junction 14) and Stoke-on-Trent (junction 15), will be closed in both directions for up to 24 hours over the weekend of 22 and 23 September.

This is the first of two bridges to be removed. A further 24-hour closure will take place next year to remove the Burton Bank footbridge.