On Tuesday Department for Transport (DfT) minister Baroness Vere told visitors to Traffex that the new enforcement powers will not be extended to local authorities in England outside London until the end of the year.

In a keynote address, she said: ‘From December, local authorities will be able to enforce moving traffic offences, such as banned turns, box junctions and driving in formal cycle lanes. They will be expected to use these powers to improve connectivity, boost active travel, and increase air quality by reducing congestion.’

She added: ‘And to ensure this change is fair, we will publish guidance for local authorities, so they can make drivers aware that enforcement is being undertaken.’

In a discussion on the issue at Traffex on Thursday, Caroline Sheppard OBE, chief adjudicator at the Traffic Penalty Tribunal said that based on her experience of cases from Cardiff, which already has enforcement powers: 'We think that this is the big warning area for the local authorities.' 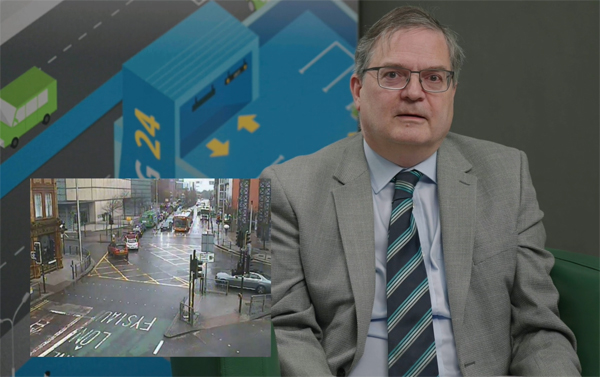 Simon Morgan, chairman of Buchanan Computing, and chair of the BSI committee for traffic signs and the Institute of Highway Engineers’ Traffic Signs Panel, said: 'A box junction is not just a simple restriction. It is not, as most people think, an offence simply to stop in a box. It's a very complex thing.'

Ms Sheppard added: 'It's absolutely critical that, before they issue the penalty charge, somebody actually has to look at the film.'

RAC spokesman Simon Williams said: 'It’s right that councils outside London have the ability to enforce known rule-breaking hotspots, but we’re fearful that some authorities may be over enthusiastic in using their new powers for revenue raising reasons, to the detriment of drivers.

'While the Government has pledged to give councils advice on how best to let drivers know enforcement is taking place, what’s really needed is clear guidance on making sure enforcement is always carried out fairly. Drivers who blatantly ignore signage or highway rules should expect penalties, but there are instances which are not always clear-cut.

'For example, large yellow box junctions can be particularly problematic to get across without stopping, often due to their design, so it’s important common sense is applied rather than instantly issuing penalties to drivers. The first thing councils should do is review the road layout at these junctions to make sure drivers can negotiate them at all times, but especially at busy periods.'

Cllr David Renard, transport spokesperson for the Local Government Association said: 'Councils have been calling for powers to make our roads safer and less congested for all road users. Powers to enforce against moving traffic offences, such as banned turns, weight restricted roads and yellow box junctions will help to keep local roads moving and make our air cleaner.

'It is good news that councils are being given these new responsibilities and it is important that access to these powers is made as simple as possible.'

Last summer the Government pledged to implement in full Part 6 of the Traffic Management Act 2004, which extends enforcement powers, currently held only by London authorities and some authorities in Wales.

In October the DfT’s traffic and technology team lead suggested that the powers could be extended this spring, although he pointed out that it would require secondary legislation to be fitted into the Government’s legislative programme and suggested that the timetable might slip.

However transport minister Rachel Maclean has on a number of occasions this year told MPs that it was 'not possible to say exactly when in 2021 the powers will be commenced' and last week the prime minister told MPs that 'traffic enforcement outside London can only be undertaken by the police' but did not state when this might change.

Content from Traffex and the the British Parking Association's Parkex is still available on demand online. Registration for both events is available here.

£87,600 - £93,600
To help us achieve our transformation we are introducing an updated business plan, and a revised senior structure with... Wiltshire
Recruiter: Wiltshire Council